Sharing is caring! Our dev blog is here to give you insights on how we work at Largelabs, the tech that we use and create as well as our art/tech pipeline. If you are a game developer, this is for you to read, comment and share 🙂

The beauty of B-Splines

This article contains details about the foundations of our Natural Roads system. If you haven’t read about it yet, please take a look at our first dev blog article : Natural Roads

When we started creating Natural Roads, we wanted a system that allowed us to create any type of linear action game. Our character / object needs to follow a path with a given speed. We also wanted the ability to design differents shapes for our paths (curves, hills)… and still have our character following the rail!

After investigating different options, we went for one called B-Spline. In this article, we will go through the basics of the implementation of B-Splines in Unity Engine, as it has been done for Natural Roads, and ultimately Escape, our first game that truly benefits from it.

What is a B-Spline?

B-Spline is a mathematical object that defines a curve (basically). Each B-Spline curve is composed of splines, a sub-curve (like a small curve portion). All splines connect to each other continiously. The continuity between successive splines inside a B-Spline curve is guaranteed mathematically. Therefore, there is not need to align your successive curves one after the other. This is done by a magical math formula 🙂 Pretty cool right?

How are B-Splines used in Escape?

In Escape, we have a road that is divided in “segments”, as defined in the Natural Roads system. Of course, the players dont see any separation between segments, nor their generation. We took care of that 😉

Segments are made with successive “sections” that are defined by a curve, hill, geometry… Basically, each segment is a B-Spline, for which each section is a spline!

You’re already lost? Then take a look at this. The screenshot below is a very (very, very) early prototype of Escape:

Not quite as fancy as the alpha demo we released recently, right? But yes, this was Escape, at the very beginning.

What you see is a B-Spline in a very raw form (in the final game we filter the vertices when we create it to optimize it and we adapt the number of vertices to the length of each spline).

All you need to know right now is that this B-Spline has 2 splines:

Both splines have the same number of vertices, which is why the second one looks very condensed. The magic here is that there is a perfect continuity between the splines. As we add splines, the path remains smooth with no extra effort!

This B-Spline will later become a “runnable” segment, after we built a mesh around it :

This is a very primitive mesh that was built around another B-Spline. It’s flat, it has only quads, but it follows the curve and gives it a certain “reality” in space.

But what really matters in the first place is getting this curve to work!

How do I get a curve?

As you understood by now, B-Spline is a mathematical object defined by an equation. A polynom, for those who still remember high school (sweet sweet memories). The equation gives the position of a vertex on the curve. It takes the following inputs:

Time for an example!

I have a B-Spline that has 3 splines and I want to calculate a vertex that is exactly halfway on the second spline. What do I need ?

I pass all this to my magical function:

And I get my result in a Vector3!  A position on the curve for these inputs…

To get the whole curve, we run the getPosition function with all the splines that will compose the curve (which means all our collections of 4 anchors) and several successive ratios (0.1f, 0.2f, 0.3f, 0.4f… 1.0f).

With a precision of 0.1f, you will get 10 vertices per spline. Your B-Spline with 3 splines will therefore have 30 vertices that you can print on screen. In the screenshots above, they are painted on screen with a magenta spherical gizmo.

“That doesn’t tell me how to get the position. What is inside this function?!”

The screenshot below is our implementation of the B-Spline equation. This is the getPosition function from the example above: 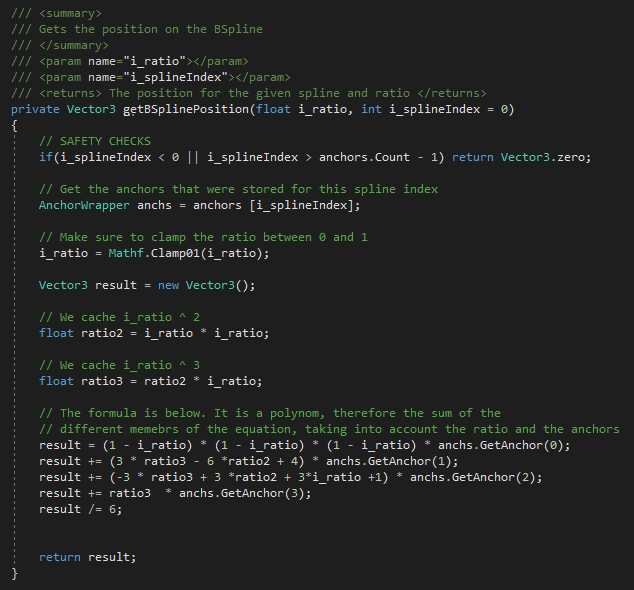 The AnchorWrapper is simply a little class that contains the anchors of a spline.

This is the crucial part. How do I place the anchors of my splines to get my curve with the shape I want? Well, I guess it’s really up to you! 😮

In your B-Spline prototype, you can easily create a handle in the Unity Editor to move the anchors in space.
Each time the position of an anchor changes, you can generate the B-Spline again, and print it on screen (with gizmos for example, like we did during our R&D phase). You will then have a tool to play around with the curves and understand how they work, what kind of results you can get…
We did this for Escape at the very beginning of pre-production. Then when we somehow understood how it worked and operated through space.
The last step was to create a little algorithm to place them according to certain understandable values. 😉
The curve and hill values in Natural Roads that give the road its aspect are given to this algorithm to slightly change the position of the anchors before generating the B-Spline.

Lifting them upwards will create a hill. Moving them continuously to the right will curve the spline on the right, etc… <3

Now that we can create paths, we need a game! With gameplay! And the first step is to make sure our character follows the path, since we are making a linear action game.

Well… Simply use the magic of B-Spline, with the getPosition function!

All you need to do is increase the ratio on the current spline at each frame. And then get the character’s position again. When the ratio reaches 1, go to the next spline. Here is a simple example – without all the weird cases that you will need to debug later on 🙂

And that’s it! You got yourself a prototype for a linear action game. The rest is up to you. There are so many great ways to use B-Splines. Getting it to work the first time opens a universe of possibilities (gameplay, camera control…)

Thanks for reading, and looking forward to seeing your prototypes!